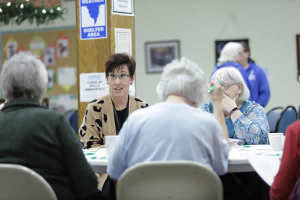 The holidays are often jammed packed with events. From shopping to entertaining, families follow the rush of the season. For Gail Meyer, slowing down during the holidays and focusing on children is an imperative.

“I can remember as a young girl watching my mother’s diamond ring in the lights,” Gail recalled, working to draw up her first memories of holidays. “She’d move her hand and the Christmas lights would sparkle in her ring.”

Gail’s eyes sparkled as she thought back to the importance of Christmas for her as a young girl. “I loved the manger scene,” Gail recalled, thinking back to the Christmas programs they performed in her country church. “I loved the manger scene because it depicted the birth of Jesus. It’s where Christmas started. I spent a lot of time in the barn, and so it was scene I was familiar with.”

Gail spent significant time with children during the holidays as an adult. She led the Christmas programs in her church, helping children memorize and perform lines depicting the Christmas story. “We sang carols, and we had programs that we’d hand out, the same as my daughter is doing now. My mother did it, I did it, and now my daughter is doing it.”

In her time directing young children in Christmas programs she realized a little known passion of engaging young people, impacting her children and the children of her church. “Usually I would be directing and my daughter would be playing the piano. She helped, and then just took over.”

Gail’s involvement in church during busy holiday seasons was an investment as she raised her children in their country congregation. Gail loved the special time she had with children, helping them hone their understanding of Christmas inside the church. “The Christmas program was the highlight of the church year. It was the beginning, and we used to do Easter programs too, but Christmas was more fun because the kids were more excited about it.”

This investment into children during the holidays is now paying dividends as Gail watches her family carry the habits she and her husband practiced for their family. “The grand kids are now involved in Swan Lake Lutheran. My grandson’s wife teaches Sunday school, so they’re involved. My daughter has pulled them into church, too. Going to church was something we just did.”

Gail sat taller in her chair as she closed our time together. “I’m proud of her for taking on roles in church,” Gail said, referencing her daughter’s ongoing involvement leading church programs. It is a lasting legacy that speaks volumes for adults during the holiday season. Children are not a distraction from some of the more important work this season. Children, are in fact, some of the most important work we can engage as we celebrate the holidays.