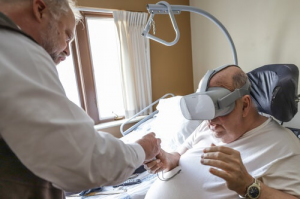 “Oh, wow!” Mike’s response after slipping on a pair of virtual reality (VR) goggles in his room at the Broen Home was telling. “I can see people over there. I wonder what they’re doing?”

LB Homes purchased a pair of VR goggles earlier this year. They have been used to give a tour of France for some independent living tenants and helped a family on hospice fulfill a dream of visiting a beach. This week they were employed to transport some residents outside of the four walls of LB Broen Home into a foreign country.

“I’ve never seen elephants in real life,” Mike continued. “They’re huge!” Mike’s head tipped back slightly, giving evidence that he was awed by the expanse of the elephants in front of him. “This is so cool.”

LB Homes has seen a great benefit in using the VR goggles. Where many might watch a TV show about a foreign country or exotic experience, the VR tours provide them a greater ability to feel immersed in the experiences in front of their eyes.

Titus Christenson, LB Homes’ volunteer coordinator, has worked with the VR goggles the most. He has seen a significant benefit to offering a VR experience for LB Homes patients and residents. “I think it’s big for us to offer for those we care for because more and more of the aging community are going to look for something like this.”