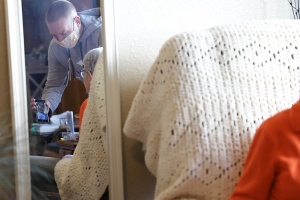 Sometimes you just need to end the day with something super sweet. On Friday that’s what happened at Woodland Lodge, sending staff and residents into the weekend with joy, hope, and friendship.

The coffee cart rolled gently down the hall. A pair of activities staff gently knocked on doors and greeted residents before pouring coffee and passing out treats. One activities staff member lingered in a specific room a little longer. His pause was a highlight for a resident and his young son.

The activities member was hoping to help a resident whose computer tablet was lagging in processing some commands. While tending to the tablet the activities staff members phone started ringing. It was his son, who recently learned how to video call his parents.

The father introduced his son to the resident, explaining his task of solving the problem with the computer tablet. “Hey, would you like to read a story?” the father asked his son. The young boy flipped around, hunting for a book he could read his dad and the resident.

The boy sat down with the phone, resting it on the book momentarily before picking it up again as he started to read. He paused on a few larger words, working to enunciate the syllables to his dad and the resident to understand what he was saying. “How old are you?” the resident interrupted, surprised that a boy of his age was so bold to read a story on a video call.

When the boy finished the story he smiled, his shoulder popped back slightly. The father congratulated his son in finishing the book. The resident beamed, heaping praise on the young boy who turned a mundane afternoon coffee time into a highlight of her week.