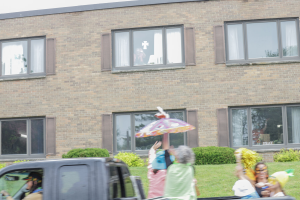 There are many measures in place to keep the region socially distanced during this time. Despite the challenges of being separated,  Augustana Lutheran Church worked to build community in our region by organizing a car parade.Residents stood by windows while others gathered outside. Residents were appropriately spaced as they waited patiently for the first car in the organized parade.

Augustana invited the entire community to meet in their parking lot at 2:45pm. After assembling a line of cars, the lead truck left the parking lot and rolled down Alcott avenue in front of Alcott Manor. Residents stood next to windows waving, reading signs that read, “We Love You” and “You are not alone”.

The parade turned down Sheridan avenue and passed by the Sheridan House. Some tenants stood under the awning. Smiles beamed from their faces. They saw a few classic convertible cars pass by their drive way. The honking and cheers caused them to raise their hands and wave in adulation.

The parade line slowed to turn into the Broen Home loop. The cars passed by the main entrance, where a number of residents were spaced under the awning. The residents held a sign that read “Thank You Augustana Lutheran!”

There was a slight drizzle falling. A truck passed by with children and adults in the back. There were cheers and shouting that streamed smiles across the faces of the residents. Some dressed in costumes. Cars from Quality Toyota and Leighton Broadcasting passed by, a true display of community support where local business owners closed their doors to participate in the parade.

The parade lasted over twenty minutes. It was an impressive display of community support for residents who haven’t been able to receive visitors for nearly three months. After the final car passed there was an uplifting spirit that lingered in the hallways. Nurses and residents buzzed about the parade, sharing how much it meant that the community thought to visit them during the afternoon.